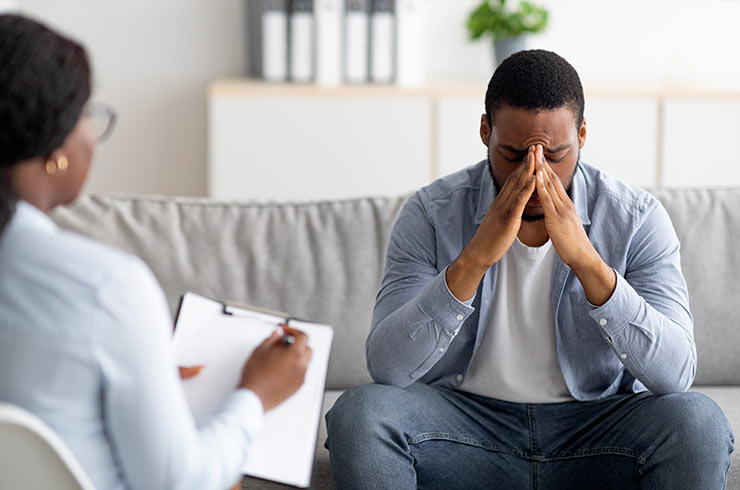 What Are the Causes of PTSD?

Post-traumatic stress disorder, or PTSD, is a diagnosis that has been given to millions of Americans and affects a relatively large portion of the population. According to the National Center for PTSD, about 7 or 8 out of every 100 people will experience PTSD at some point in their lives, with women holding a greater risk of experiencing the disorder than men.

While some people may feel embarrassed or even angry when given a diagnosis of PTSD and try to hide it, it’s not something that makes the individual weaker in any sense. Understanding how it can develop is a crucial factor in coming to terms with a diagnosis and can help the individual begin healing. We’re going to take a deeper look at just what PTSD is, its causes and symptoms, and how you can get treatment to help minimize its effect on your life.

PTSD is a psychiatric disorder that can develop in people that have undergone stressful or traumatic events or, in some cases, simply witnessed them. It can develop after exposure to many different potentially traumatic events, from natural disasters to severe auto accidents, war, sexual assault, terrorist attacks, or mass shootings. Because PTSD is so common in those returning from war, it has been known as combat fatigue and shell shock.

In general, those living with PTSD will have intensely disturbing feelings and thoughts related to their trauma, for a long time after the trauma ends, in some cases continuing for many years. Individuals with PTSD may experience other mental health challenges following the traumatic event, such as emotional instability, estrangement, or detachment from others.

What are the causes of PTSD?

One of the most significant causes leading to the development of PTSD is war. According to the National Center for PTSD, it’s estimated that about 15 percent of Vietnam War veterans and 12 percent of Gulf War veterans have PTSD. Other common causes of PTSD include:

It’s thought that PTSD may be a survival or coping mechanism created by the brain, and it’s thought that the flashbacks, apprehension, or anxiety felt by those with PTSD is the brain’s way of keeping them mindful of potential future danger. When the brain does this, it may not actually be conscious of the fact that the flashbacks and emotional issues are doing more harm than good.

It may also be related to an overactive fight-or-flight response. This state of hyperarousal often happens in response to a state of acute stress or danger and results in a large amount of adrenaline being released into the system, along with other stress hormones. In those with PTSD, the number of stress hormones like adrenaline is often measured and found to be at abnormally high levels.

Who is at risk?

Those at risk for developing post-traumatic stress disorder are anyone who has previously endured or witnessed traumatic events. While men and women are both able to develop PTSD, women are more than twice as likely to develop PTSD than men (10% for women and 4% for men).

Another risk factor is a limited or even non-existent support network at home following the event. This is one of the more common features of those who develop post-traumatic stress disorder, and this lack of support can lead to an increased sense of estrangement.

Those with a history of mental illness or mental health issues may also have an increased likelihood of developing PTSD. This can include anxiety or panic disorders, bipolar disorder, depression, or compulsion disorders. Additional unrelated stress or trauma adjacent to the primary trauma event can also contribute to higher rates of post-traumatic stress disorder.

Signs and symptoms of PTSD

For those that develop undiagnosed PTSD, many signs can help determine if it’s time to seek help. Whether diagnosed or not, the symptoms of post-traumatic stress disorder can occur and can lead to additional complications in the individual’s life.

Avoidance of the issue is common. Those with post-traumatic stress disorder often do not want to talk about it or even think about it. They tend to avoid anything that may remind them of the trauma, from places to people, even songs or smells that bring back memories.

Arousal symptoms or significant behavior changes can also cause very intense emotions to develop, leading to additional emotional challenges, such as outbursts of anger or even violence. Even if the individual doesn’t experience outbursts, they may still have significant mood swings.

Other common symptoms include:

Without appropriate PTSD treatment, the individual may also experience direct complications of post-traumatic stress disorder. This can lead to social, mental, financial, and even physical side effects.

With the emotional challenges of PTSD, distancing oneself from others is common, but it can also lead to significant social isolation. This isolation and the stress of the PTSD symptoms themselves can create an environment conducive to mental health challenges. Without proper treatment, these challenges can turn into illnesses.

Other common complications of post-traumatic stress disorder include financial neglect, often causing the individual to slip into debt. Emotional instability can also lead to poor self-care, which can dramatically affect the individual’s physical health.

Getting help for PTSD

If you’ve experienced or witnessed traumatic events, you may have developed PTSD. If you find yourself or someone close to you experiencing the symptoms and signs of post-traumatic stress disorder, the first step is to speak to someone about it. Reach out to local experts today and discuss your concerns in a comfortable, confidential environment. If you’re diagnosed with PTSD, you can begin building a treatment plan tailored to your needs, so you can work through your trauma and live a less stressful life.