Those who mix prescription benzodiazepines and alcohol often do so in hopes of increasing the effects of both chemical substances which can have dangerous results.

Those who mix prescription medications and alcohol often do so in hopes of increasing the effects of both chemical substances. The truth of the matter is that combining alcohol with any medication is extremely dangerous, and it can easily lead to several health-related complications including an increased risk of overdose-related death. In most cases, benzodiazepines are used to treat severe anxiety-related disorders. Because they are so potent and have such a high propensity for abuse, they are generally prescribed modestly. Benzodiazepines work by slowing brain activity through directly affecting and interacting with the central nervous system.

Alcohol also works to affect the central nervous system, and using both chemical substances simultaneously will increase the detrimental effects of nervous system depression even more significantly. Interestingly enough, benzodiazepines are often used to treat the more severe symptoms of alcohol withdrawal. However, when taken other than as prescribed, the results of the drug can be devastating – and when combined with another substance that produces similar effects (such as alcohol) the results can be lethal. 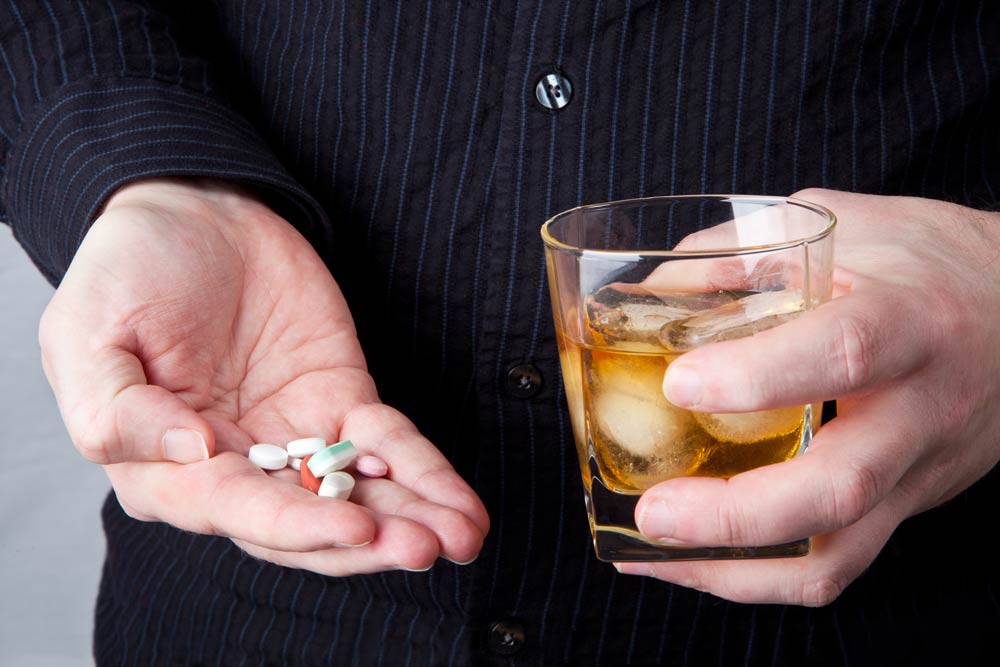 Several medications are considered central nervous system depressants, including sedatives (like benzodiazepines), hypnotic drugs, depressants (like alcohol), and tranquilizers. Drugs that slow down activity within the brain is beneficial in treating disorders that result in hyperactive brain activity – however, the feelings associated with central nervous depression and decreased brain activity can be habit-forming. Some will begin actively seeking the feelings of relaxation and euphoria that these drugs produce. In most cases, drugs are psychologically addictive before they become physically addictive. This means that the feelings of benzodiazepines and alcohol products will lead to addiction more quickly than a physical dependency (alteration of brain chemistry). Take a look at the effects the following drugs have when they are used individually and when they are combined.

Benzodiazepines are a classification of prescription sedative used to treat anxiety disorders, alcohol withdrawal, and seizures. The National Institute on Drug Abuse recently reported that upwards of 17 percent of American adults abuse benzodiazepines, and that roughly 2 percent of individuals who had abused this specific medication had developed several physical dependencies. This number may seem low, but it is important to note that the vast majority of individuals who are abusing benzodiazepines are also drinking alcohol on a regular or near regular basis – a combination that puts them at increased risk of a host of side effects and long-term issues.

Some examples of brand name benzodiazepines include Xanax, Klonopin, Valium, Ativan, and Librium. When a medical professional prescribes any one of these drugs, they will recommend that alcohol is completely avoided. Those who ignore these warnings – or who take medication other than as prescribed – are at risk of substance abuse and dependency.

Alcohol is the most commonly abused chemical substance in the US. According to the 2018 National Survey on Drug Use and Health, 14.4 million American adults struggle with an alcohol use disorder. According to this same study, less than 8 percent of adults with an AUD received the professional care they needed. It can be difficult to determine whether or not you (or someone close to you) is struggling with an alcohol abuse disorder, seeing as alcohol use is so widely societally accepted. The chances are, however, if you are struggling with alcohol abuse and you are actively abusing benzodiazepines, you are suffering from a dual diagnosis disorder that requires immediate medical care.

Absolute Awakenings is dedicated to treating those who have struggled with alcohol abuse and the abuse of prescription sedatives such as benzodiazepines. As it stands, these two chemical substances do a significant amount of damage on the mind and the body, and intensive treatment will always be required when they have been abused in conjunction for any length of time. If you or someone you love has been abusing any chemical substance, we are available to help. Our comprehensive program of recovery tackles a wide range of substance abuse disorders, and no matter what you are currently struggling with, our main priority is getting you started on your journey of addiction recovery as quickly as possible.